← Monastic Training
The Truth is Unchanging and Unceasing → 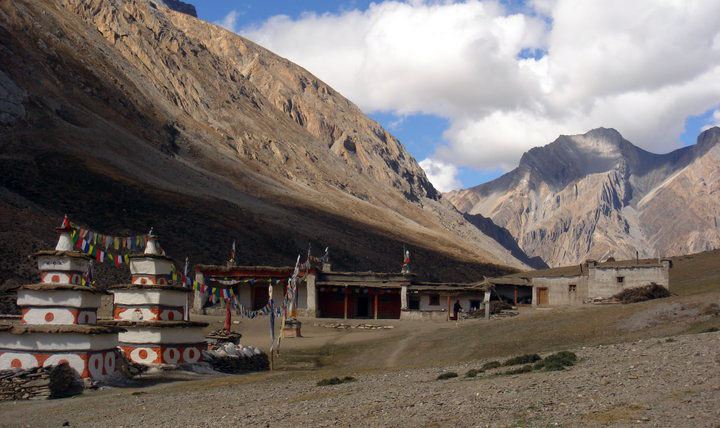 Location: The full name of this monastery is Yanggon Tongdrol Phuntsok Ling, Temple of the Yangtön Lineage, Land of Complete Fulfillment that Liberates upon Seeing.   However, it is commonly referred to simply as Yanggon Monastery.  At 14,160 ft above sea level, it is located in the highest village within the remote area of Dolpo, Nepal.  This is the village of Charka (Tsarka in Tibetan.  Charka is the common Nepali pronunciation.)  It is located at the junction of two rivers appropriately named The Big River and The Small River.  The monastery complex consists of the first temple which is now in ruins, the second temple which was originally built in the mid-nineteenth century and later moved in the early 90’s and consolidated with the third temple which was built in 1988 by the current head lama, Yangtön Lama Tashi Gyaltsen.

The village of Charka

History: The history of the Yangtön lineage is closely interwoven with the history of the Yungdrung Bön tradition itself.  It is said that two of Buddha Tönpa Shenrap’s disciples were Yangtön lamas.  And during the reign of the first Tibetan king, Nyatri Tsenpo in the second century B.C., the official priest for the king and the kingdom was a Yangtön lama.  The original seat of the family was at Taktsé Jari in Upper Tsang, Western Tibet.  The great lama, Yangtön Sherab Gyaltsen was the first to travel away and eventually settled in Mustang, Nepal where he established a hermitage.    Another lama, known as Lama Ngakpa, settled in Mustang for a time but then made his way to Dolpo.  Because all of his children died at a young age, he brought a boy to Dolpo from the original family seat of Taktsé.  This prompted the rest of the family to follow and settle in Dolpo.  It was this boy, Yangtön Gyaltsen Rinchen, who founded the nearby monastery of Samling.  He was also a teacher to the esteemed Dru Gyalwa Yungdrung who wrote a practice manual for the Oral Transmission of the Zhang Zhung Dzogchen teachings.

Currently: The head lama of the monastery is Yangtön Lama Tashi Gyaltsen.  He was the first of the Yangtön lamas to receive his Geshe, Doctorate of Religion and Philosophy, from Menri Monastery in Dolanji, India.  His younger brother soon followed and is now the head teacher of the monastery, His Eminence Menri Lopön Thrinley Nyima Rinpoche.  Their nephew, Yangtön Geshe Tenzin, has also received his Geshe degree and, like his uncles, he travels throughout the world teaching as well as spending time in the village of Charka organizing building projects and offering rituals and teachings to the villagers.  In addition to his activities of building and preserving the family temples, monks’ living quarters and building projects, Yangtön Lama Tashi is also responsible for the teaching and spiritual guidance of a small group of young monks. 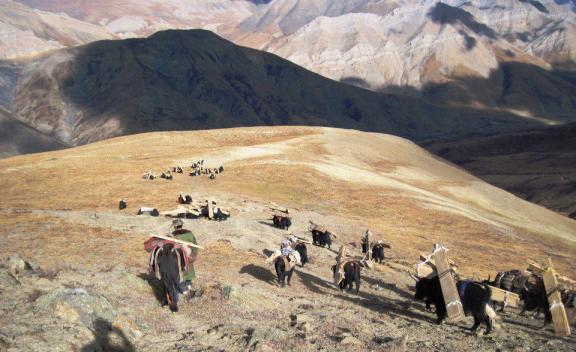 Because of the remoteness of the village, all supplies for building must be carried in on foot.  This is a slow and arduous process.  Building supplies must be brought by animal from Jomsom, Mustang via a narrow, single-track path.  This can take up to seven days.  Large beams for construction must be carried by humans from Tibet.  The cost of getting the supplies to the remote village can average 4-5 times the actual cost of the supplies themselves.  Rocks for a building’s foundation can only be gathered in Winter because they are located on the opposite side of the river and it is necessary to wait until the river freezes enough to be walked across.  In recent years, in spite of the difficulty, the Yangtön lamas have been able to build and begin to establish a much needed medical clinic in the village that will serve the 500-600 villagers.   The clinic is located on monastery grounds and is supervised by the monastery.  Before the establishment of the clinic, the nearest medical support was over a hundred miles away.  Common medicines were rare and infection from minor cuts and injuries easily became life threatening.  Infant mortality was over 50%.  Construction of the free healthcare clinic began in 2009.  Three people are being trained as doctors who will staff the clinic.  One is learning Western medicine, one is learning traditional Tibetan medicine and a third is specializing in being a midwife.  In addition to medical intervention, the staff will also educate the local population about hygiene and first aid.

Medical Clinic in the village of Charka

For more information about the free healthcare clinic and its current needs, http://kwling.org/projects/clinic/

← Monastic Training
The Truth is Unchanging and Unceasing →