The Nine Ways of Bön 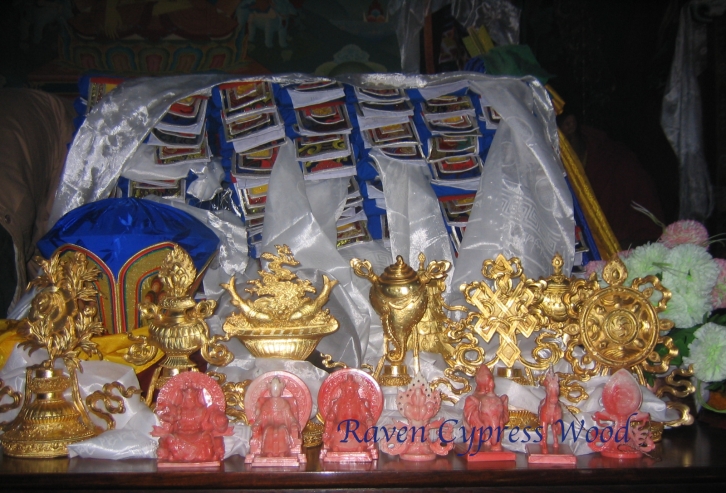 Yungdrung Bön is Tibet’s ancient, indigenous religion.  It was first introduced over 17,000 years ago.  The Enlightened Being who brought these teachings was known as Tönpa Shenrap Miwoche.  One classification of the Lord Tönpa Shenrap’s complete collection of teachings is called “The Nine Ways”.  These are nine different ‘Ways’ or perspectives, from which to practice the teachings according to an individual’s circumstances and capacity.   All of the ‘Ways’ have compassion as their base, and all guide towards the same result of eliminating suffering and increasing wisdom.

There are three hagiographies of Lord Tönpa Shénrap Miwoché’s life.  They are commonly known as the Do Düs which is the short version with only one volume.  The Zer Mik is the medium length version with 2 volumes.  The Zi Ji is the long version with 12 volumes and a total of 61 chapters.   It is within the longer version, the Zi Ji, that the teachings of Yundgrung Bön are explained by the Buddha within the context of The Nine Ways. The 1st, 2nd, 3rd and 4th Ways are classified as The Causal Ways, or the Bön of Causes.  The 5th, 6th, 7th, and 8th Ways are classified as the Ways of the Result, or the Bön of the Fruit.   The 9th Way contains the teachings of the Great Perfection, or Dzogchen.

In the past during times of religious persecution, the Bönpo would hide their texts rather than have them destroyed.  Later, after the political environment had changed and they were no longer in danger, the texts would be brought out from their hiding places.  In this way, there came to be three different classifications of The Nine Ways of Bön according to the region in which the texts were found after being hidden.  These three are referred to as The Southern Treasures, The Northern Treasures, and The Central Treasures.

The Nine Ways of Bön according to the Southern Treasures:

1. The Way of the Shen of Prediction: This Way includes divination, astrology, various rituals, and medical diagnosis.

2. The Way of the Shen of the Phenomenal World: This Way includes rituals dealing with communication with external forces such as rituals of protection, invocation, ransom of the soul and life-force, and repelling negative or harmful energies.

3. The Way of the Shen of Magical Power: This Way includes venerating a deity or master and then applying mantra and mudra in order to accomplish a goal such as requesting assistance from natural forces.

4. The Way of the Shen of Existence: This Way is primarily focused upon rituals for the dead and methods to promote longevity for the living.

5. The Way of the Virtuous Lay Practitioners: This Way specifies the proper conduct of lay people taking vows.

6.  The Way of the Fully Ordained: This Way specifies the proper conduct for those who are fully ordained practitioners.

7. The Way of the White AH: This Way is primarily focused upon tantric practice using visualization.

8. The Way of the Primordial Shen:This Way is primarily focused upon higher tantric practice.

9. The Unsurpassed Way: This Way is primarily focused upon the practice of Dzogchen, or The Great Perfection.   It is concerned with the realization of the true nature of one’s own mind.