The 5th day of the 1st month of the Tibetan lunar calendar is the birth celebration of His Holiness the 1st Menri Trizin Nyammé Sherap Gyaltsen Rinpoché also known as the second buddha. In 2021, this date coincides with  February 16th on the Western calendar and is the 665th year. H.H. Nyammé Sherap Gyaltsen Rinpoché was a reincarnation of Yikyi Khye’u Chung, one of Buddha Tönpa Shenrap Miwoche’s sons. He was responsible for uniting the three transmission lineages of sutra, tantra and dzogchen as well as founding one of the largest Yungdrung Bön monasteries in Tibet, Tashi Menri Ling.

Born in 1356 in the region of Gyalrong into the Dru lineage, as a child, he could recite mantra and read scripture without having studied.  At the age of ten, he decided to become a monk.  In 1387 at the age of 31, he entered the prestigious Yeru Wensaka monastery and eventually became its abbot.   During a journey to Eastern Tibet, Yeru Wensaka was destroyed by flooding and mudslides.  After returning, he searched the ruins of the monastery for artifacts.  He took these and established Tashi Menri Monastery further up the same valley.  It was now 1405 and he was 50 years old.

H.H. Nyammé Sherap Gyaltsen Rinpoché was known throughout Tibet as a great scholar and prolific writer on the many varied subjects within the Bön scriptures.  He also exhibited many miracles and signs of his spiritual realization.  Twice, he flew up into the sky.  During one of these flights, he burned his hat with the rays of the sun.

In 1415 at the age of 60, he passed away.  His body levitated high into the air, but due to the many heartfelt prayers of his disciples, the body came back down.   During the cremation, rainbows appeared and an eagle circled three times around the cremation area before disappearing into the West.

Today,  Bönpos will spend the day with their eyes looking skyward.  If you are lucky enough to be visited by a vulture on this day, it is said to be an auspicious sign of having received the blessings of the lama known as the Second Buddha, the Unequaled One, H.H. Nyammé Sherap Gyaltsen Rinpoché.

Want to join the mandala of Nine Ways supporters? Follow this link https://ravencypresswood.com/donate/

The Fifth Way: In the Service of Virtue

Within the Nine Ways of Bön, the Fifth Way is called The Way of the Virtuous Lay Practitioners and specifies the proper conduct and commitments of a lay person taking vows. This Fifth Way is the first of the Nine Ways classified as ‘Ways of the Result’ or ‘Bön of the Fruit.’ In the Tibetan language, a lay practitioner is called ‘gen nyen’ [Tib. dge bsnyen] which literally translates as ‘one who serves virtue’ or ‘one who draws near to virtue.’ When asked the meaning of these concepts, the enlightened all-knowing teacher, Buddha Tönpa Shenrap Miwo answered,

“Virtuous means without negative actions. This is one who is committed to serve virtue through their body, speech and mind. Service means serving without holding contradictory views and properly remaining steadfast in service to virtue.”

The Three Virtuous Actions of the Body:

The Four Virtuous Actions of Speech:

The Three Virtuous Actions of the Mind:

When asked to teach the outward form of the lay practitioner, The All-knowing Teacher, Tönpa Shenrap first instructed the gathered assembly to construct the first Elegant Yungdrung Chorten [Sanskrit: stupa] according to his detailed instructions. Once completed, he consecrated the chorten and then began teaching the outer forms and behavior of a gen nyen or lay practitioner.

The Elegant Yungdrung Chorten which represents the stages of enlightenment

The practitioner must go before a pure lama who guides disciples and take the appropriate vows. According to a commentary written by the 23rd abbot of Menri Monastery, His Holiness Nyima Tenzin Rinpoché:

“As for the vows of a gen nyen: There are five kinds of lifetime vows.  To abandon killing, to abandon taking what is not given, to abandon impure, wrong kinds of sexual conduct, and to abandon false speech are four.  Abandoning one of the four kinds of food is the fifth.  Some people have taught abandoning alcohol as a branch vow.

This is the gen nyen of completely renouncing according to the five kinds of established laws.  Because of that, the gen nyen of pure behavior has renounced the basic kinds of impure activity.”

As for killing, one must abandon killing in anger especially another human being. One must abandon stealing, especially when it is driven by desire. One must avoid sexual contact that is damaging or abusive, one must avoid harmful speech especially if it creates a division within the spiritual community, and one must avoid lying especially about one’s spiritual experiences and attainments. As for the fifth which is a branch vow, one renounces either one of the four kinds of food. In this context, the four kinds of food are 1) meat, 2) garlic, 3) solid food after the mid-day meal, and 4) intoxicants such as drugs and alcohol. Regarding drugs and alcohol, the deeper meaning is the renunciation of intoxication which is an obstacle to mindfulness and incites negative behavior.

According to Buddha Tönpa Shenrap in The Nine Ways of Bön,

The Buddha goes on to describe the outer practices.

“As for the five intermediate principles, one should perform pure water-cleansing rites, perform prostrations and circumambulations with devotion and aspiration, create and place tsa tsa, and offer torma. Presenting offerings is a branch of gathering the [two] accumulations.”

(As a meditational deity, Drenpa Namkha is most often depicted in a semi-wrathful form, blue in color and holding a yungdrung in his right hand.)

According to the lunar calendar of the Yungdrung Bön, the 10th day of each month is the day set aside for the practice of the three sages: Drenpa Namkha and his two twin sons, Tséwang Rikdzin and Pema Tongdrul.   On this day, it is appropriate to pay homage and make offerings to these lamas as well as to recite the mantras associated with their respective practices. During the month of November 2019, this day is November 6th.

“Now during this negative time, instances of virtue decrease and the opportunities for good fortune, prosperity and nutrition for the destitute diminishes.  You are surrounded by the wealth deities and their retinues.  I pray to the Great Lama and his two sons, to the subduer of demons Drenpa Namkha, bestow a treasury of riches and prosperity!

Look upon me with your unbiased compassion morning and night during the past, present and future.  Turn back both seen and unseen enemies! My present and future Refuge and Protector, bless me to accomplish my intentions!”

~From the Prayer of Fourteen Stanzas to Drenpa Namkha, translated by Raven Cypress Wood

Iconography: Animals Under a Throne

Iconography is the use of images and symbols to convey meaning or concepts especially in a spiritual context. The iconography within the Yungdrung Bön religious tradition is detailed within many volumes of scriptures. Symbolic meanings are specific and often complex depending upon the context. Meaning is attributed to includes composition, proportions, color, hand objects, clothing, ornamentation, etc.  Sometimes, a few of these details are left to the interpretation of the artist but they are most often prescribed within the sacred text.

A throne depicting elephants under the main figure

The Tibetan thangkha is a painting on canvas that is framed in brocade and has dowels at the top and bottom to enable the painting to be hung and also rolled like a scroll.  These paintings are rolled from the bottom towards the top.  There are often ties at the top that are used to fasten the rolled painting and allow it to be easily carried.

A throne depicting horses under the main figure

An example of the use of iconography within the Yungdrung Bön religious tradition is demonstrated by the images of animals depicted underneath the throne of enlightened deities. This position symbolizes that the deity tames or transforms the quality associated with the animal. According the oral teachings of the preeminent scholar and spiritual master His Eminence Yongdzin Tenzin Namdak Rinpoche, the five common animals depicted in this way symbolize the following:  the lion symbolizes anger, the elephant symbolized ignorance, the garuda symbolizes desire, the horse symbolizes jealousy, and the dragon symbolizes pride.

A throne depicting garudas under the main figure

For example, although the buddha Sherap Jamma has all of the perfected qualities, emphasis is placed on her teaching sentient beings to transform anger and hatred into love and kindness.  This is symbolized by lions being depicted on the throne underneath her as she sits peacefully.

A throne depicting each of the five animals.All translations and content by Raven Cypress Wood ©All Rights Reserved. No content, in part or in whole, is allowed to be used without direct permission from the author.

The high altitude temple of Déden Samten Ling, or simply Samling, has been significant in the preservation of the Yungdrung Bön religious tradition.  The main temple was established more than 900 years ago by Yangtön Gyaltsen Rinchen in a remote and mountainous region of Dolpo, Nepal near the Tibetan border.  Since that time, this monastery, as well as others in Dolpo, has been maintained by a hereditary line of lamas within the Yangtön family. (For more information about the prestigious Yangtön family lineage, see previous post: https://ravencypresswood.com/2017/05/27/yangton-sherap-gyaltsen/) 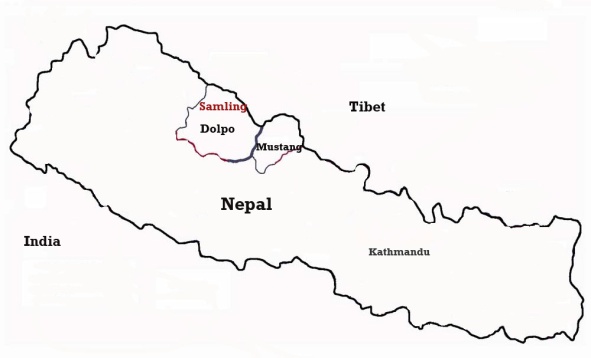 According to a text of the Yangton family lineage, some time during the 13th century Yangtön Gyaltsen Rinchen was staying near Mt. Tisé in Western Tibet (a.k.a. MT. Kailash) when he was visited in a dream by the Bönpo sage and great lama Drenpa Namkha.   The Yangtön lama was instructed to travel to Dolpo and build a temple.  Traveled the distance to Dolpo and having searched throughout its rugged terrain, Yangtön Gyaltsen Rinchen had a series of auspicious dreams while staying in the area of Bijer that convinced him that he had finally found the proper place to construct a Yungdrung Bön temple.

Yangtön Gyaltsen Rinchen was the first of many Yangtön lamas at Samling who collected and preserved sacred texts.  Because of this, many volumes of texts have been throughout the course of many centuries. It was during a trip to Samling Monastery in 1961 that Dr. David Snellgrove discovered a copy of the Zi Ji, a hagiography of Buddha Tönpa Shenrap. He subsequently wrote and published one of the first English language translations of a Yungdrung Bön text, The Nine Ways of Bön.  The Zi Ji text that he consulted for his translation was estimated to be approximately 400 years old.

Currently, Lama Sherap Tenzin Rinpoche is the head of the monastery.  He was born in 1953 and has received extensive religious training and has been trained in the science of Tibetan medicine.