The Eight Branches of Divine Bön

Merit Field of the A Tri lineage.

The Eight Branches of Divine Bön are:

The Branch of Prostrating is an antidote to pride.

“To the supreme speech of Tönpa Shenrap, which is ornamented with the magical letters,

To His scriptures that remain until the present day,

I prostrate with the devotion of my body, speech, and mind.”

The Branch of Making Offerings is an antidote to greed.

“Having set out this ornament of unsurpassed offerings,

and magically emanated offerings that fill the entire sky,

I present these clouds of unsurpassed offerings to the Enlightened Ones of the three times.”

Within the Yungdrung Bön tradition, there are many different kinds of offerings. These include the daily five offerings of butter lamps, pure water, food, flowers, and incense. There is also the four daily offerings of generosity which are the offering of smoke of purification, the water offering, the burnt food offering, and the offering of the body. Among the foundational practices is the practice of the mandala offering. In this practice, one imagines offering the entire three-thousand-fold universe and all of its contents to the field of accumulation. See previous post regarding the Five External Daily Offerings: https://ravencypresswood.com/2017/01/14/the-five-daily-offerings/

The Branch of Admitting Wrongdoing is an antidote to hatred.

“With my body: the acts of murder, stealing, and sexual misconduct,

with my speech: speaking lies, slander, and divisive speech,

with my mind: ignorance, and wrong views, etc.,

whatever wrongdoing that I have committed due to the three poisons,

in the presence of the Enlightened Ones, the loving protectors,

without concealing anything, and with regret and sorrow,

I openly admit my wrongdoing.”

The Branch of Rejoicing is an antidote to jealousy.

“Whatever virtue that is performed by any migrating sentient beings in this world,

whatever merit is accumulated by any migrating beings,

I rejoice because of all of this merit.”

Rather than being jealous towards those who have greater circumstances for making offerings or donations, supporting lamas, attending retreats and empowerments, or performing other spiritual activity, the Yungdrung Bön practitioner rejoices in the good fortune and accumulation of merit of others.

The Branch of Requesting Enlightened Beings to Stay is an antidote to ignorance.

“From this time forward, as a result of accomplishment,

in order to completely destroy the doors of the three negative places of rebirth,

I pray to the Enlightened Ones to please not go beyond the places of the six destinies of migrating beings.”

By requesting the Enlightened Beings to stay and act for the benefit of sentient beings, rather than abiding in a state beyond cyclic existence, we activate their compassionate blessings. 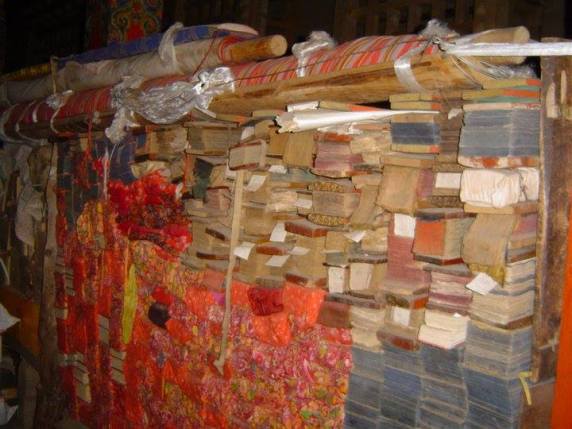 The Branch of Requesting Enlightened Beings to Turn the Wheel of Bön is an antidote to wrong views.

“In order to empty cyclic existence of those who have been pulled into transmigration,

I request You to stay during this eon for the benefit of migrating beings,

and teach all the various scriptures of the Bön of truth,

the magical speech which opens the mouth which has been mute.”

The Branch of Aspiration Prayers is an antidote to doubt.

“From the three doors of my body, speech, and mind,

like an ever-flowing river, may I continually perform the ten virtues!”

There are many aspiration prayers, or mönlam, within the Yungdrung Bön scriptures. One of the well-known and often recited aspiration prayers is the Tséwang Mönlam. This profound prayer is recited during the forty-nine day period after death for those who have died, on auspicious days, during eclipses of the sun or moon etc. By following the link below, a pdf of the English translation of the prayer is offered free for the personal use of Yungdrung Bön practitioners. The download link is located under “Freely Offered Translations.” It is free for personal use, but no publication of any kind is allowed. https://ravencypresswood.com/publications/

The Branch of Dedication Prayers is an antidote to attachment.

“Whatever virtue has been accumulated through inviting the enlightened beings, prostrating, making offerings, admitting wrongdoing, requesting. and offering prayers of aspiration,

Furthermore, in order to attain the unsurpassable result,

I dedicate it for the enlightenment of both myself and others.”

All quotations extracted from “The Small Sutra of the Eight Branches of Divine Bön” found within Shardza Tashi Gyaltsen’s A Tri Ka Lung Gyatso, Guidance of A, an Ocean of Scripture.

Posted on April 28, 2018, in Uncategorized. Bookmark the permalink. Leave a comment.