Kongpo Bonri, the Bon Mountain where Khandro Dechen Wangmo stayed in retreat and had many spiritual experiences.

In 1918 at the age of fifty one, Khandro (Sanskrit: dakini) Dechen Chokyi Wangmo revealed a terma, or hidden religious treasure, that contained the hagiographies of sixteen female realized practitioners.  This was only one of many treasures that she revealed during her lifetime.  Born in Nyarong Tibet in 1868, Dechen Wangmo began having clear revelatory dreams by the young age of seven.  These dreams continued throughout her lifetime and often contained the location as well as the key to revealing many terma.  A non-sectarian practitioner, she was a disciple of both Bön and Buddhist lamas including the greatly esteemed and realized Shardza Tashi Gyaltsen.  Her main practice was Dzogchen accompanied by long life practices.  She compiled a chöd text and composed spiritual songs, including a song of revelation while she was practicing at the sacred site of Kongpo Bönri.  (See previous article  https://ravencypresswood.com/2015/08/29/pilgrimage-kongpo-bonri/ )

Consort and spiritual companion to the terton Sang Ngak Lingpa, it was Dechen Wangmo’s  dreams that alerted him to the location of many terma as well as giving the key for opening them.  Traveling to Hor, the couple stopped by a lake whereby Khandro Dechen Wangmo retrieves the terma of a statue of Ludrup Yeshe Nyingpo as well as a sacred text from the water spirits guarding the lake.  Having arrived in Hor, she is asked by the king of Hor to give teachings in addition to the teachings and empowerments given by Terton Lingpa.

She had her own disciples, some of whom compiled a hagiography of her which details her many pilgrimages, terma revelations and dreams and sacred visions. Her importance and realization was recognized by many lamas who wrote long life invocations for her.  She and Terton Lingpa traveled extensively but their activities were mainly focused in the Amdo area of Tibet. 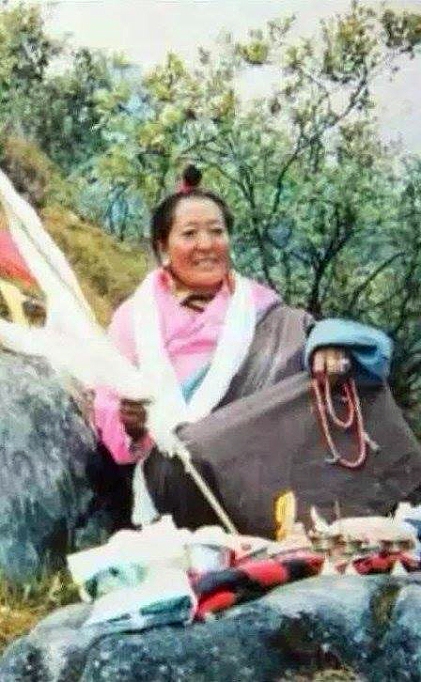 Khandro Khachö Wangmo (1940-1987) was considered an incarnation of Khandro Dechen Wangmo.  She was the daughter of Kundrol Drakpa who was also known as Kundrol Humchen Drodul Lingpa  and was a lineage lama and terton of Sar Bön, or New Bön.  She was a realized practitioner and tertön who in 1986 discovered a small statue of Amitayus, a nine-pointed dorje and blessed khandro dust from the sacred mountain Kongpo Bönri in south-eastern Tibet.  Her discovery was witnessed by the public and documented in an essay by Span Hanna entitled Vast as the Sky, the Terma Tradition in Modern Tibet which is included in the book Tantra and Popular Religion in Tibet by Geoffrey Samuel and Hamish Gregor, edited by Elisabeth Stutchbury.