There is one sacred mountain in Tibet that both Buddhists and Bönpo circumambulate counter-clockwise, or the Bön way.  That mountain is Kongpo Bönri, the Bön Mountain.  Located in Southeastern Tibet on the Northern bank of the Yarlung River, Bönri rises to over 14,700 ft.  In general, it is heavily forested. Circumambulation of the mountain takes three to seven days and tourists begin their pilgrimage from the Eastern slope of the mountain.

During his time as a human being, the founder of the Yungdrung Bön tradition made only one trip to Tibet.  The demon Khyap pa was attempting to stop Lord Shenrap from spreading his teachings.  First, he tried tormenting Lord Shenrap’s wife and children.  When that didn’t work, he stole seven of Lord Shenrap’s horses and took them to the Kongpo valley in Southeast Tibet, hiding them beneath the castle of the king of Kongpo.  Seeing this as an opportunity to introduce the Yungdrung Bön teachings into Tibet, Tönpa Shenrap followed him.  Reaching the Kongpo valley, the demon tried to block his approach with a mountain.  Pushing this mountain down with the power of his mind, Lord Tönpa Shenrap manifested another in its place for the future benefit of his followers.  This was Kongpo Bönri.

Kongpo Bönri contains many holy and blessed sites.  These include self-appearing sacred images and mantra as well as stones that are carved with the life story of Lord Tönpa Shenrap.  At the center of the mountain is what is known as “The Heart of Küntu Zangpo.”  Here, there are five caves that are blessed by the Buddha himself.  Four caves are in each of the four directions with the fifth in the center.  It is said that circumambulating the mountain and praying from the heart can purify negativity and defilements as well as bring a long life. 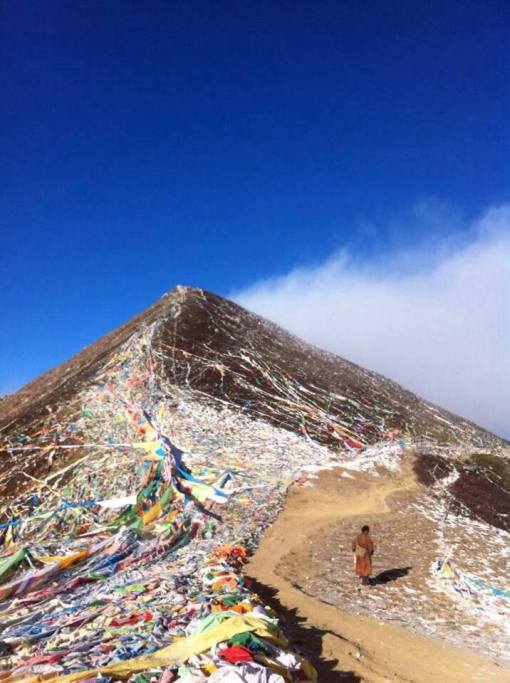 “EMAHO!  The Mountain of Bön is praiseworthy of all gods and humans.  It is exalted in every way like the sun and moon that illuminate the sky.  Lamas, rikdzin and khandro are always  gathered here.  It has profound, sacred treasure and magnificent self-appearing letters and symbols.  I pray to the supreme place, the great Bönri!

By circumambulating with faith and aspiration, compassionate blessings effortlessly come forth.  Emotional afflictions, latent karmic tendencies and the two obscurations are purified.   Meditation practice and any yoga that is focused upon has increased power.  May we become masters of the vast expanse of space!  And ultimately, may we realize the mind of Künzang that abides within!”

~Excerpt from Prayer to Bönri to Quickly Attain Blessings written by the 19th century holy woman and terton of Bön, Khandro Dechen Chokyi Wangmo.  Translated from the Tibetan by Raven Cypress Wood ©2015.