Pilgrimage to the Center of the World: Gang Tise

It is the seat of Shiva according to Hindus.  Many Jains believe it to be the holy site where the founder of the Jain religion, Lord Rishabhdev, attained liberation.  It is the place where Milarepa lived and practiced according to Buddhists who call the mountain Gang Rinpoche, Precious Snow Mountain.  And according to the Bönpos, it is Mount Tisé, sacred dwelling place of deities, the place where Buddha Tönpa Shenrap Miwoché taught and meditated, and where many sages after him, such as the great lama Drenpa Namkha, Choza Bönmo and Lishu Taring, practiced the teachings of the Yungdrung Bön.  For all of them, to make a pilgrimage to this place and to circumambulate the mountain has great spiritual significance.  “Whoever visits Gang Tisé will achieve liberation after three lifetimes.” And, “If you cleanse with the purification waters of the four directions (of the mountain), you will be reborn in a pure realm.”

In Sanskrit and on most English language maps, it is called Mount Kailash.  It is located in far Western Tibet in the Ngari region which is a remote and arid landscape only spotted with vegetation.  With no source of wood, campfires are fueled with goat and horse dung.  Reaching the area through a pass of over 16,000 feet in altitude, the air is thin and the light intensely reflects upon every object in the landscape.  Until recent history, there were no roads in to this region.  The mountain has a 22,028 foot peak that is topped with snow year round.  Each of the four sides of the mountain are distinctively different. It has never been climbed.   For the devout, that would be an unthinkable desecration.  In 1980, Reinhold Messner was given permission to climb it by the Chinese.  However, he declined.  In 2001, a Spanish team led by Jesus Martinez Novas was given permission to climb the mountain.  However, due to international disapproval, the Chinese reversed their decision and banned all attempts to ever climb the mountain.

Mount Tisé was at the center of the ancient kingdom of Zhang Zhung.  Tisé is a Zhang Zhung word referencing the mountain as the source of many waters.  It was the soul mountain of both the Zhang Zhung king and the kingdom and was considered the center of the world.  The Zhang Zhung deity, Walchen Gekho and his 360 emanations,  reside at its summit.   It is described in many historical Yungdrung Bön texts in great detail.  “In the center of the phenomenal world is Mount Tisé, the Nine-storied Yungdrung Mountain.  From it, four rivers flow towards the four directions.”  These four great rivers which originate in the area surrounding the mountain are the Karnali, also known as the Ganges which flows Southward, the Sutlej also known as the Punjabi which flows Westward, the Brahmaputra which generally flows Eastward, and the Indus which generally flows to the Northwest from the area.  The texts say that Mount Tisé will survive the fires that will destroy the world at the end of the current eon.  The texts describe it further:  “It looks like a crystal chorten.  It’s four sides are like four equal squares in the four directions.”  And, “It has the four kinds of qualities: peaceful, expansive, powerful and wrathful.  It is an immeasurable shrine with great blessings”

Pilgrimage season is generally May-September.  The circumambulation, or korwa, begins at Tarchen, a small settlement on the South-side of the mountain.  Until the Chinese invasion, it was a major center for the region’s trade.  Now, although the summer continues to be the busy trade season, it is much diminished from the past.  By the time a pilgrim reaches this starting point, it is possible that they have spent years getting here, often prostrating the entire journey.  Once here, if a pilgrim is unable to undergo the hardship of the korwa, here at Tarchen someone can be found to be sponsored to go in their place.  In that case, the merit generated by the virtuous activity is shared between the sponsor and the one actually doing the korwa. For the Bönpo and the Jain, the korwa is counter-clockwise.  For Buddhists and Hindus, it is clockwise.  The path is marked by many sacred places of veneration where great sages meditated or where the power and blessings of deities reside.  There are also four places designated for prostrations along the way.  These are areas large enough for the pilgrims to stop and spend time prostrating and paying homage to the sacred mountain.  However, there are those practitioners who choose to perform full prostrations the entire length of the thirty-two mile circuit around the mountain.  Doing this, a single circuit takes about two weeks.  These pilgrims must carry their provisions with them and wear thick, leather aprons and mittens to protect their body from the stoney ground.  For those who walk around the mountain, most choose to finish within three days.  Others choose to begin hours before dawn so that they can complete the journey in a single 13-15 hour day.  The pilgrim’s path rises in the thin air to an altitude of 18,500 feet at the Dolma la Pass, the highest point of the route.

(Pilgrims prostrating around the mountain.)

In general, pilgrims perform three circumabulations of the mountain.  If the pilgrim is completing the circuit in a single day, they will take a day of rest in between the three korwa of the mountain.  Some make a commitment to complete 1o8 circuits.  This takes two pilgrimage seasons.  From the starting point at Tarchen, there is also an inner korwa.   Several miles North of Tarchen past a couple of monasteries, there is a smaller mountain, called Nandi, whose korwa brings the pilgrim close to the very face of Mount Tisé.  This inner korwa is forbidden until one has completed at least thirteen circumambulations of the outer korwa. 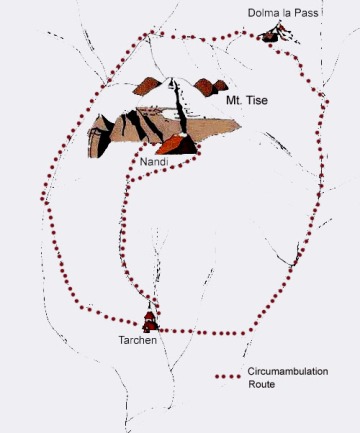 Just seeing the mountain is a blessing.  And undergoing the arduous task of its korwa is said to purify one’s negativity.  It is vitally important in the history of Yungdrung Bön.  According to the text, “Mount Tisé, the crystal chorten, soul mountain of Yungdrung Bön, is like nine stacked yungdrungs.  Externally, it is like a chorten made of crystal snow.  Internally, it is like the palace of the three tutelary deities.  Secretly, it is the vast and profound gathering place for the mother and sister khandro.”  “Having washed away karmic traces by purifying oneself with the healing waters, you will be reborn in a joyous realm of the gods.  Having reversed obstacles and adverse circumstances by performing the korwa through prostrating, you will be able to live out the full extent of your lifespan.”  Thus it is said.

To read more about Mount Tisé see Sacred Landscape and Pilgrimage in Tibet by Geshe Gelek Jinpa and Charles Ramble.  The Light of Kailash by Chogyal Namkhai Norbu Rinpoche.  Or The Sacred Mountain of Tibet by Russell Johnson and Kerry Moran. And in Tibetan, Gangs Tise’i sKor by HE Menri Yongdzin Tenzin Namdak Rinpoche.