← Now is the Time
The Lotus Hat of the Yungdrung Bön →

The Meaning & Benefit of Offering Torma 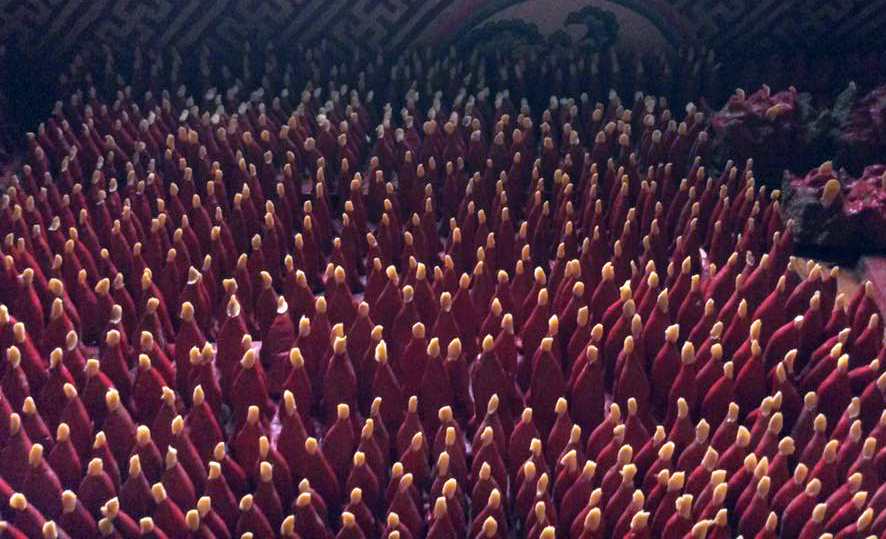 The offering of torma is a common practice within the Yungdrung Bön religious tradition. The Tibetan term “torma” [gtor ma] literally means “something that is thrown, tossed, or strewn.” This refers to the action of many kinds of torma being tossed into the sky as an act of offering. However, not every torma is offered in this way. External torma can be offerings of the three white things: butter, milk, and salt-free cheese, and the three sweet things: honey, crystallized sugar, and dark sugar such molasses or maple syrup. External torma are also commonly made from roasted barley flour called tsampa which is mixed with sacred substances and shaped according to the particular kind of offering being made. In general, peaceful offering torma of this kind have a round base and wrathful torma have a triangular base. One of the many kinds of daily offering torma within the Yungdrung Bön tradition is the water torma which is one of the four daily offerings of generosity.

Buddha Tönpa Shenrap Miwoché was born into the human realm in the ancient land of Tazik. He only traveled into the country of Tibet one time. During this brief visit, his teachings to the Tibetan people were centered around compassion and the use of torma as offerings as a substitute for killing animals to use as offerings. 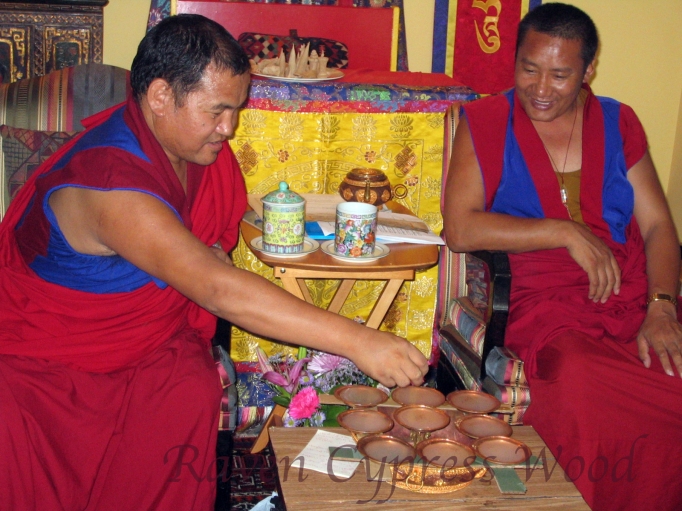 Every kind of torma offering has three parts: the preparation, the main practice and the conclusion. The specifics of these are according to the particular practice being performed and the kind of torma being offered. In general, When preparing the torma, the hands and utensils are washed and any container or plate used to present the torma must be clean and without any defect or damage. After being properly made and arranged, it must be ritually cleansed with incense and water. Having generated an intention of compassion and generosity, the torma is offered to a clean place. When possible, the torma are tossed onto roofs as being a place free of the defilement of having been walked upon and also being a higher place to offer to higher beings. For offering to lower beings, the torma are placed upon the ground in a clean place.

“Come here now and keep your protection vow! Accept these offerings of smoke and torma! Act as a companion to me! Expel the causes for harm and obstacles! Act to accomplish this entrusted activity!”

— Extract from The Invocation of Chammo Lamlha, Goddess of Travel

The recipients of the torma offerings are both the enlightened beings as well as the six kinds of beings within cyclic existence. The recipients can be classified in many ways. They can be classified into four categories known as “The Four Guests.” These are 1) the guests of reverence which are the enlightened beings, 2) the guests of exalted qualities which are the powerful, worldly protectors, 3) the guests who are among the eight classes of spirits and demons, and 4) the guests of compassion or charity. We offer to the enlightened beings to purify our sacred commitments with them, elicit their blessings and protection, and to develop our positive qualities of devotion and generosity. We offer to the worldly protectors in order to elicit their powerful and magical protection. We offer to the eight classes of spirits and demons in order to repay any karmic debts that we might owe to them so as to pacify any feelings of revenge or harm that they might harbor against us. And we offer to the guests of charity to alleviate their suffering and misery. 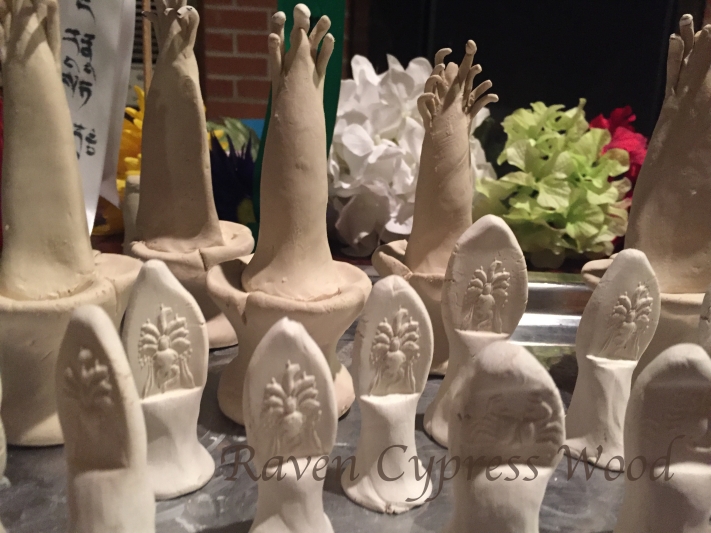 “I offer this inexhaustible, decorated torma to the twenty-five classes of lu* who are surrounded by millions of friends and associates. Because we dig the earth, break the rocks, chop down trees, drain the ponds and streams, create contaminated smoke, and commit immoral acts near the homes and places of the lu; they faint, go mad, become angry, or grow weak.

Regardless of whatever violence, disagreements, or ill will have occurred in the past, because of offering this torma of nectar, may the diseases of the lu be pacified! May their hopes and wishes be fulfilled!”

— Extract from The Ritual of Regularly Giving Torma to the Lu

Additionally, by offering torma we naturally practice six of the ten perfections. 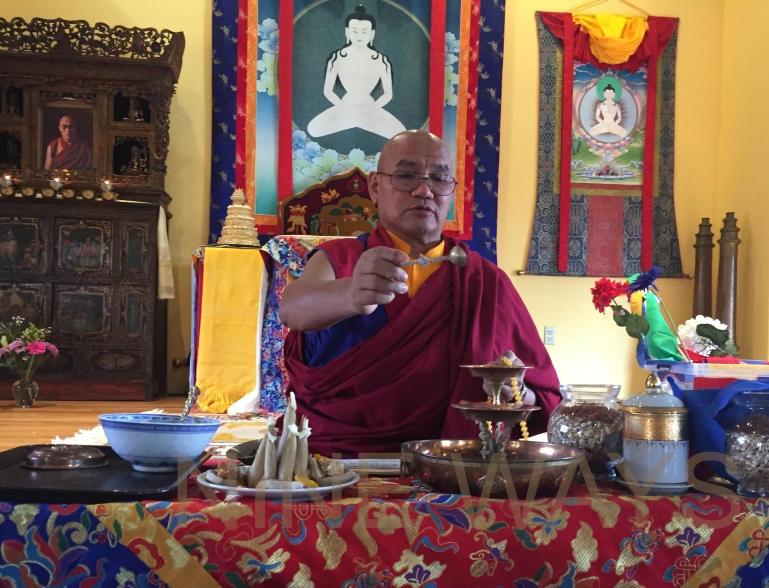 By offering torma we engage in the vow of individual liberation through our act of generosity and therefore eliminating the mind of harming other beings, and we engage in the bodhisattva vow through offering to the guests of charity. Additionally, our longevity, merit, good fortune and personal power increase. And we purify the causes to be reborn into the lower realms. 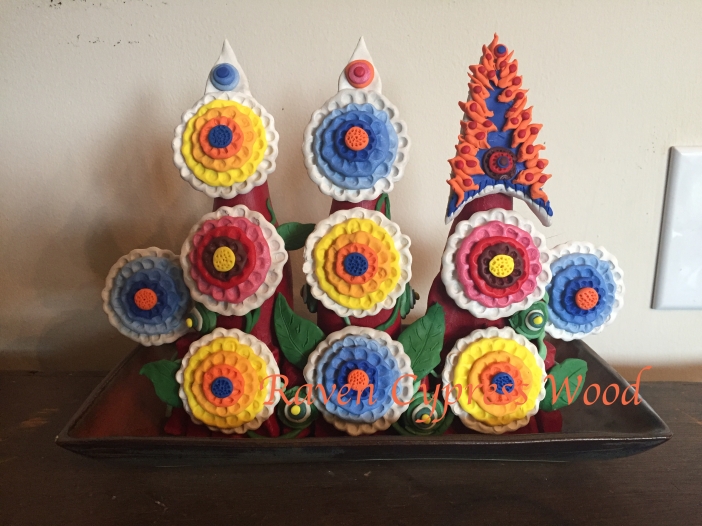 It is important to note the difference between “offering torma” and “yidam torma.” Although both are referred to as “torma” they serve very different purposes. A yidam torma is also prepared from tsampa mixed with sacred substances and has a specific form and attributes according to the associated meditational deity or yidam. However, the purpose of the yidam torma is to act as a sacred support for the presence of the deity during empowerments and meditation upon the yidam. This kind of torma is not offered. Once it has been consecrated, it is placed in the highest position upon the shrine and treated as the sacred abode of the deity.

Posted on December 7, 2019, in Prayer and Ritual, Translation, Uncategorized. Bookmark the permalink. 4 Comments.

← Now is the Time
The Lotus Hat of the Yungdrung Bön →