A Wheel of Sound

Dra Khor at the entrance to the temple of Triten Norbutsé Monastery near Kathmandu, Nepal. Photo credit: Raven Cypress Wood

Within the Yungdrung Bön religious tradition there is a style of poetry that is considered an advanced art and is often used to praise spiritual masters or states of realization. The poetic verse is written in a kind of graph in which each syllable is written within its own geometric space often in contrasting colors that form patterns or images. These syllables then intersect with other lines of poetry or verse. The arrangement of syllables must be made in such a way that they must make sense with each intersecting syllable.

There are easier and more difficult versions of this poetic style. The easier style can be read left to right and top to bottom. The more difficult styles can be read left to right, top to bottom, diagonally, and from bottom to top. This style of poetry is called Künzang Khorlo་or the short form Kün Khor, Wheel of All Goodness. However, it is also often referred to simply as dra khor, a wheel of sound. 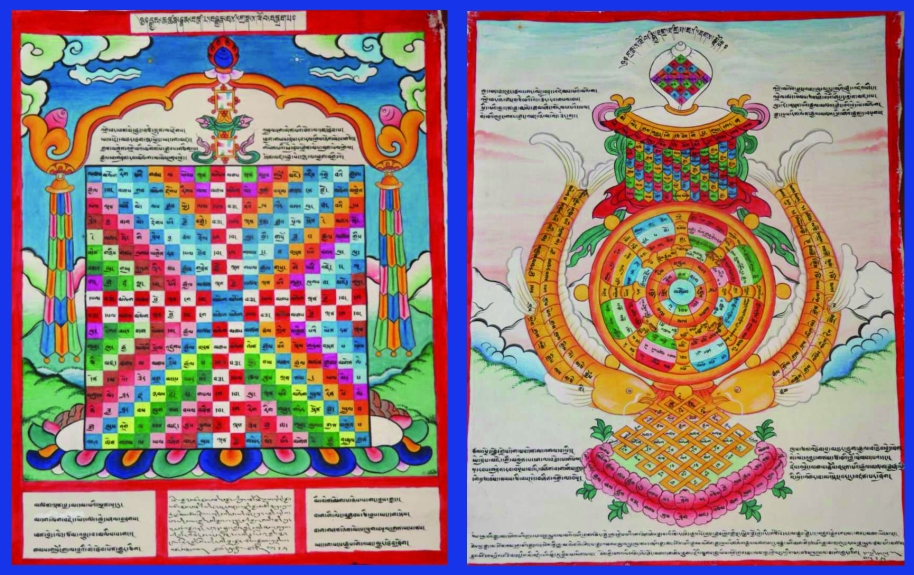 The top image of a dra khor in this article hangs in the entrance way of Triten Norbutsé Monastery located near Kathmandu, Nepal. This dra khor praises the founder of Menri Monastery and the realized master who is considered the second buddha, His Holiness Nyammé Sherap Gyaltsen Rinpoché. The well-known “De Chen Gyalpo” prayer in his honor is featured within the yellow, diagonal squares.

Never forgetting what you have perceived,

You are the unequaled crown ornament of the Bönpo world.

At the feet of Sherap Gyaltsen, I pray!”

When the top line is read straight across, the first syllable “de” in the top left corner now becomes part of the word “dewar” “blissfully” and the line praises the realization of Nyammé Sherap Gyaltsen Rinpoché.

“You are the very essence of the three bodies of those who have blissfully gone; with unobscured, exalted knowledge, you embody the entirety of Bön.” 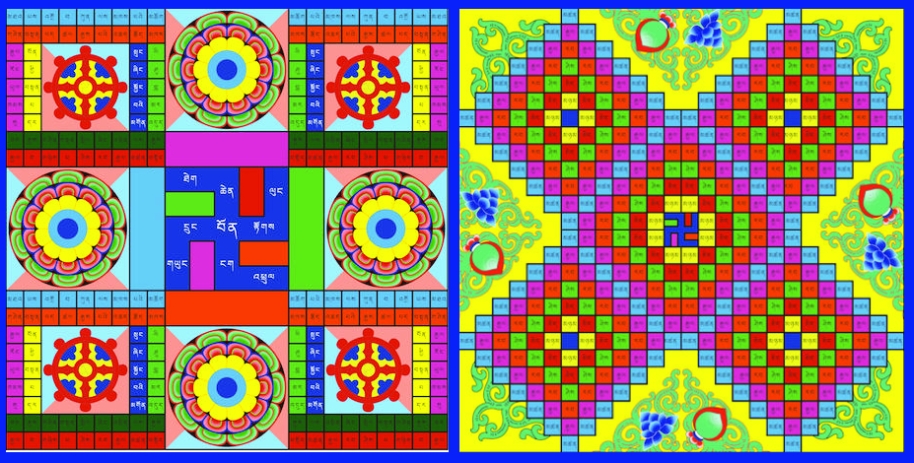 To begin a dra khor, the number of boxes needed is determined by the number of syllables in the poem. Once a design is determined and the boxes are drawn, a single syllable is drawn inside each box. Each dra khor can contain either a single poem or multiple poems or verse relating to a single subject or theme. These dra khor are often placed in the entrances of temples as they are considered to be objects of auspiciousness and blessing.

Examples of dra khor from the collected works of Mawang Kunga Rangdrol Rinpoche.

Beginning with the first establishment of a Yungdrung Bön dialectic school in exile in 1978 at Tashi Menri Ling, His Eminence Yongdzin Tenzin Namdak Rinpoché reformed the curriculum to include subjects originally taught in the renowned dialectic school of Yeru Wensaka and to also include subjects that were previously taught individually rather than as an organized part of the studies. In this way, he aimed to preserve traditional knowledge that was in danger of being lost. One of the subjects added to the mandatory curriculum was poetry. The current dialectic school teaches poetry according to three aspects: 1) style and meaning, 2) rhyming and meter and 3) symbolic meaning.