The Field of Accumulation: The Aural Transmission of Zhang Zhung

In the Yungdrung Bön tradition, the place where the deities and objects of veneration are gathered is called the “Tsok Zhing”, the “Field of Accumulation”.  It is also sometimes translated as the “Field of Merit” or the “Merit Field” because what is being accumulated by paying homage and making offerings to this place is merit, or virtue.  This is the Merit Field according to the Menri Tradition from a drawing done by the great master and scholar HE Yongdzin Tenzin Namdak Rinpoche. 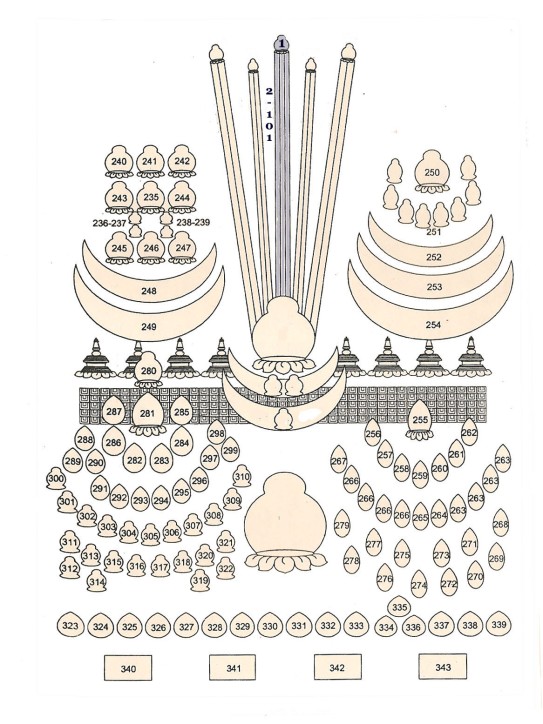 #1-101 depicts the Aural Lineage of Zhang Zhung, the Zhang Zhung Nyen Gyü. This lineage of Dzogchen teachings is continuous and unbroken.

#1-9 are the Nine Divine Beings of the Mind to Mind Transmission. These Beings transmitted the teachings by way of intrinsic awareness, rikpa.

1. The source of the lineage, the teacher Küntu Zangpo. This is the Bönku. He is naked and without ornamentation.

2. Shenlha Ökar, the pure, white light deity of compassion. This is the Dzok ku. His compassion is all-pervasive and he is the embodiment of exalted, positive qualities.

3. Gyalwa Shenrap, the divine being that descended to the human realm in order to guide sentient beings. This is the Tulku and he became known as the Lord Tönpa Shenrap Miwoché.

4. Tsemé Öden, the divine being that emanated into a god realm in order to guide bodhisattvas.

5. Trulshen Nangden, the divine being that emanated into a god realm from the mind of Küntu Zangpo.

6. Barnang Khujuk, the divine being that emanated into a god realm from the speech of Küntu Zangpo

7. Zangza Ringtsun, a divine emanation of the Great Mother Sherap Chamma and the divine mother of Chimé Tsukpü. Trulshen nangden descended upon her right shoulder in the form of a turquoise cuckoo and caused a subtle, internal heat. One year later, she gave birth to Chimé Tsukpü. Her body color is golden and she holds a golden vase in her right hand and a golden mala in her left hand.

8. Chimé Tsukpü, He is turquoise in color. Nine days after his birth, his mother Zangza Ringtsun found him suspended in space and radiating light. He taught both tantra and Dzogchen.

The beginning of the Aural Transmission Lineage

These 24 Masters were all from the ancient kingdom of Zhang Zhung and used speech to transmit the teachings. Each of them attained the full realization of Dzogchen and displayed that realization by attaining the rainbow body of light. These 24 masters are divided into 4 groups.

#21-29 The Nine Masters of Experience Within

The Six Masters who show the Six Meanings of Dzogchen

The Nine Masters of Experience Within

The Six Yogis from Zhang Zhung

Here, the lineage splits into Upper & Lower systems of transmission according to the geographical location in which it was transmitted.

The Upper System of Transmission

The Lower System of Transmission

Here, the lineage splits again into the Southern and the Northern Lineage. Below is the list of the lamas of the southern Lineage of Transmission.

The Five Masters of the Mantra and the Mind:

(This blog is offered for free to the worldwide students of Yungdrung Bön.  It is made possible by readers like you.  If you would like to join in making a gift of support for this blog or the translation work of Raven Cypress Wood, please go to https://www.paypal.com/home, click ‘Send’ and use Raven’s account rcw108@gmail.com.  Any amount is of great support.)