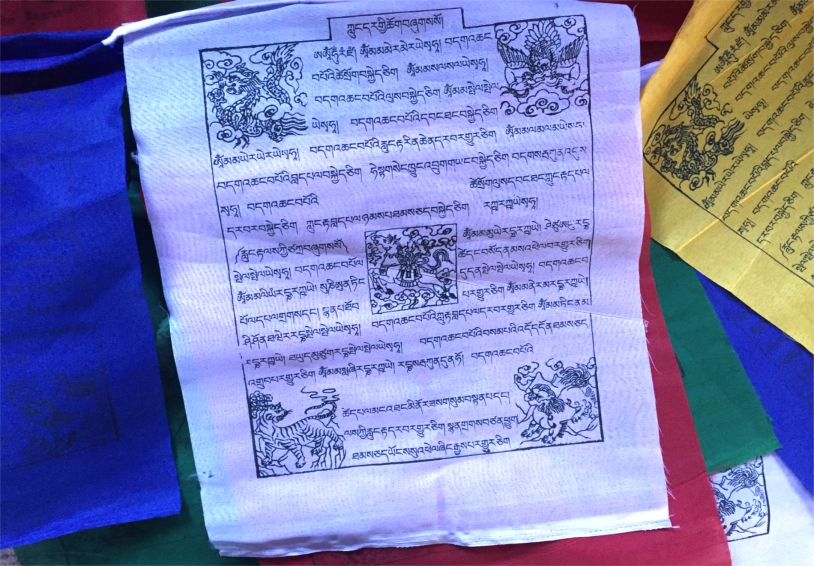 In honor of the Tibetan New Year, Nine Ways is offering traditional Yungdrung Bön lungta prayer flags during the 1st lunar month. These prayer flags are available while supplies last for those within the continental United States. For a $20 donation, you will receive a set of 15 14″ x 11.5″ Yungdrung Bön prayer flags that have been specially designed to include two spaces that are designated to write the name of an individual onto each flag, personalizing the prayers. For example:

You will also receive translation of the prayers and mantras on the flags. These prayer flags have already been consecrated and blessed. To order, email Raven Cypress Wood at RCW108@gmail.com with the number of prayer flag sets wanted, address etc. Donations can be made through Paypal to the same email, via GooglePay, or check. If the prayers for refuge, generating the mind of enlightenment, admission of wrongdoing and the dedication of merit are needed, please include that request in the email and the English language translation of these prayers will be included.

Each prayer flag has 2 places designated to include an individual’s name.

Prayer flags originated with the Yungdrung Bön religious tradition and the teachings of Buddha Tönpa Shenrap Miwoché.  According to the eminent scholar Yongdzin Tenzin Namdak Rinpoché, in ancient times the Bönpo would blow mantras and prayers onto strips of colored wool. These strips of wool were then draped over the branches of bushes and trees. This practice eventually evolved into the kind of prayer flags that we are familiar with today. According to the modern-day saint Shardza Tashi Gyaltsen Rinpoché, the very best size for a prayer flag is five arm spans,  the next best is three arm spans, and other sizes are acceptable as long as they are larger than the palm of the hand. Writing the prayers and mantras in gold or silver is the very best, using cinnabar is next best and writing with ink mixed with various medicines and the six excellent ingredients, or other blessed substances is the minimum.

Before being raised, prayer flags must be consecrated and blessed. Then, in the early morning or at least before noon, one must perform the practices of going for refuge, generating the mind of enlightenment and admitting wrongdoing and receiving purification. Then, the flags are hung outside where they will be exposed to the wind.  Preferably, in a high and clean place where they can be left undisturbed. Afterwards, prayers of aspiration and dedicating the merit of the virtuous activity are performed.  When prayer flags are raised in this proper way, the benefit is unimaginable. Some of the best days for raising prayer flags are during the 1st month of the lunar New Year especially on the 3rd day, on the auspicious lunar days of full moon, new moon, 8th, or 22nd, on the anniversary of the birth or paranirvana of a buddha, or whenever the sacred teachings of Yungdrung Bön are being bestowed.

As for the extensive benefit of raising prayer flags, it is said if they are raised atop a high mountain, whoever eats food or drinks water from that mountain or whoever sees the flags with their eyes, they will attain buddhahood. If they are raised at a sacred place, that person will definitely be reborn into a buddha land. In general, prayer flags support the fulfillment of the wishes and intentions of this lifetime and the attainment of buddhahood in a future lifetime. Raising prayer flags purifies negative actions of body, speech and mind. Even the most vile of actions can be purified when prayer flags are established in the proper way and with sincerity. Additionally, they can remove obstacles for the recently deceased. According to Shardza Rinpoché:

“After someone has died during the 49 days of the intermediate state, if 49 prayer flags are established, the deceased will certainly not fall into lower rebirths.”

As for the power of raising prayer flags,

“Raising 1,008 prayer flags is better than a shen of magical power erecting a buddha statue made of gold.”

“Having written these secret yungdrung mantra such as the mantras of the buddhas, the 100-syllable mantra, the three essence mantras, or the six syllables upon cotton or tree bark; when it is exposed to the wind whoever among sentient beings sees it with their eyes will obtain a state of happiness.”

A windhorse carrying a flaming jewel.

There are many kinds of prayers and mantras that are appropriate to be written on prayer flags, By far, the most common type of prayer flags are raised to increase lungta. Lungta is sometimes translated as the force of good luck. It is the force that has the ability to uplift the other individual forces of health, vitality, charisma, and the soul. When the lungta is weak however, the other individual forces will become diminished. Lungta [Tib. rlung rta] means “windhorse” and it is this image that is depicted at the very center of the prayer flag. This symbolizes the incredible speed with which prayer flags can raise the lungta. Each of the four corners display one of the four guardian animals of the four directions: a lion, tiger, garuda, and dragon. Most often, prayer flags are grouped together as a set of five with each flag being one of the colors of the five elements. The elements and their corresponding colors are: earth=yellow, water=blue, fire=red, air=green, and space=white.

Lungta-type flags are not raised for the deceased since their primary activity is to strengthen and protect the health, lifespan etc. However, when raising lungta prayer flags, the merit of that virtuous activity can be dedicated to those who are deceased along with all other sentient beings..