Tibetan Kings of the Yarlung Dynasty & the Yungdrung Bön 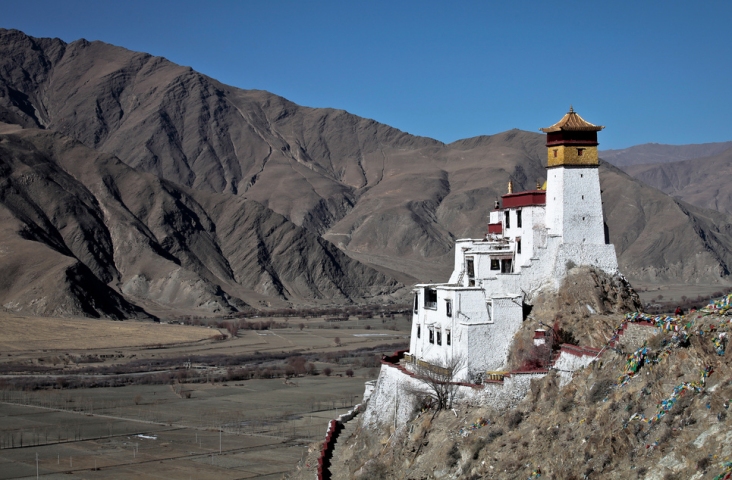 At the time when the first ruler of Tibet was established, the empire of Zhang Zhung was vast, the practice of Yungdrung Bön was flourishing and the Buddhism of India founded by Shakyamuni had not yet entered the territory of Tibet.  The principality of Tibet consisted of minor kingdoms but was not yet unified under the rule of a single monarch.  In order to consolidate power, the leaders of central and eastern Tibet decided to appoint a sole ruler of the entire realm.

During this time, it is said that Nyatri Tsenpo, the first king of Tibet, appeared and was chosen to rule over the Tibetans.  His ancestry is of other-worldy origins and has been variously detailed as descending from either the gods or the powerful theurang spirits.  In either case, it is believed that his power and magnificence were greater than that of a normal human being.  It was believed that he had a supernatural connection to heaven known as a mu cord, which resulted in his being able to ascend the cord and return to heaven upon his death.  Therefore, he did not leave a corpse behind.  This was true of all of the first seven Tibetan kings.

The Thirty-Four Tibetan Kings of the Yarlung Dynasty*

1-7 The Seven Tri of the Sky, During their reign, the teachings of Yungdrung Bön flourished.  Connected with the celestial sphere by a mu cord, these kings are said to have ascended to heaven by this cord at the time when their sons were old enough to rule, thereby not leaving a corpse behind.

12-17 The Six Good Ones Upon the Earth, During their reign, lamas of the Zhang Zhung empire acted as the Royal Bön Shen

18-25 The Eight Dé of the Water, During their reign, the teachings of Dzogchen were spread

31-34 The Four Bönpo Kings of Prosperity, During their reign, the Yungdrung Bön teachings and practices flourished under the guidance of many knowledgeable lamas.

*Due to political reasons, historical lists of the Tibetan Kings differ among Buddhist and Bön accounts as well as differing among texts within the same tradition.  I have relied upon the Yungdrung Bön text: Dar rGyas gSal Ba’i sGron Ma written by Pa Ton Tengyal Zangpo in 1345.