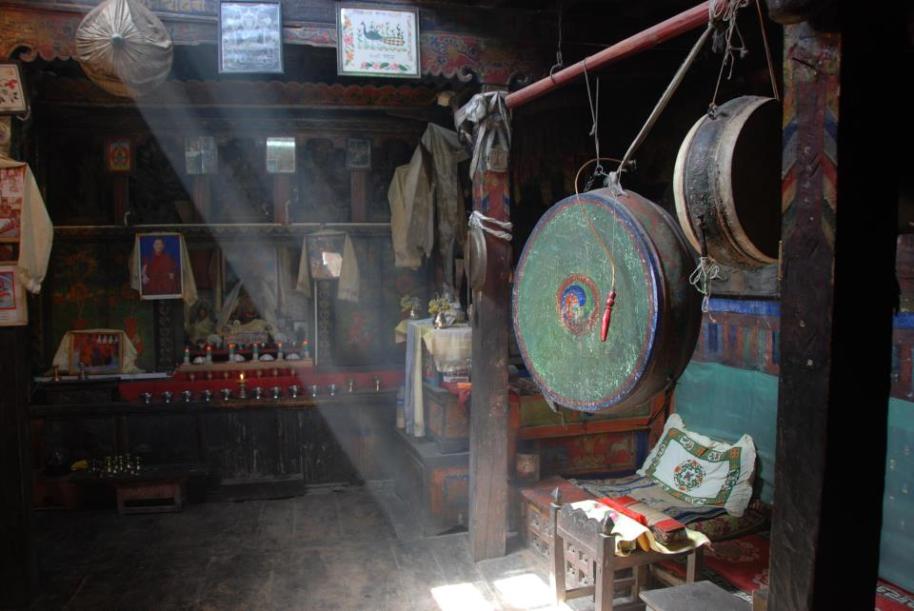 The official name of this monastery is Tashi Gégye Thaten Ling.  However, it is commonly referred to as the Dorpatan Monastery.  This was the first Yungdrung Bön temple in exile. It is located in Nepal, south of Dolpo, in the village of Dorpatan.  In addition to the monastery, there is also a medical clinic which serves the local population.  The settlement is now roughly divided into an area inhabited by the Bönpo and an area inhabited by the Buddhists, mostly Kagyu.  However, the religious practices and festivals are predominantly Yungdrung Bön.

In the early 1960’s after the Chinese invasion, a refugee camp for the Bönpo was established in Dorpatan by The Red Cross.  At that time, the spiritual head of the Bönpo and 32nd Abbot of Menri Monastery, Kündun Sherap Lodro, was staying in Kathmandu after having fled Tibet.  He traveled to Dorpatan and initiated the construction of a temple.  Kündun Sherap Lodro later went to India and management of the temple was taken over by Tsultrim Nyima.  He was the father of the current abbot of Triten Norbutse monastery in Kathmandu, Khenpo Tempa Yungdrung Rinpoche.  Tsultrim Nyima was strongly devoted to his work with the temple but was unfortunately killed at a relatively young age.  At that time, management of Dorpatan Monastery was taken over by Sonam Gyaltsen.  After his death, Geshe Tenzin Dargye was appointed as the abbot and continues in this position until today.

Khenpo Ratsa Geshe Tenzin Dargye was born in 1966 in Jomsom Mustang, Nepal.  His father, Yungdrung Gyal, is the 36th in the Phong la Ratsa lineage of East Amdo.  His mother, Konchok Dolmo, is of the Amchi lineage, a Tibetan doctor.   Khenpo Tenzin Dargye was tutored at home by his father until the age of nine and then sent to study in India.  At the age of sixteen, he decided to become a monk.  In 1996, he received his Doctorate of Religion and Philosophy, or Geshe Degree,  from the Dialectic School of Menri Monastery. After this, he worked as the organizer of the Bön Children’s Welfare Center and the medical dispensary for seven years. In 1996, he was asked by the 33rd Menri Trizen to transfer and to become the abbot of Dorpatan Monastery.  Over the years, Khenpo Tenzin Dargye has worked to improve the monastery.  Together with Dr. Tsultrim Sangye, they established a medical clinic in order to provide much needed medical services to the local and surrounding area.  Khenpo regularly travels and teaches throughout Asia, the United States, Mexico and Europe.

In the region surrounding Dorpatan Monastery, the main agriculture consists mostly of potatoes although there has been an effort to establish apple trees.  During the summer, there is also a great deal of animal husbandry.  During the Winter, many people migrate south and trade potatoes for salt, rice and wheat.