Anniversary of the Passing Away of Nangtön Dawa Gyaltsen Rinpoche

The anniversary of the passing away of Nangtön Dawa Gyaltsen Rinpoche is the 7th and 8th lunar days of the 11th month. In 2022, these dates coincide with January 9th-10th on the Western calendar. He was born during the Fire Dragon year of 1796 and founded Ralak Yungdrung Ling Monastery on the bank of the Yarlung Tsangpo River in 1834. This monastery developed into one of the largest and most prestigious centers for learning within the Yungdrung Bön tradition. It was renowned for its extensive library and the fact that it had its own woodblocks to print texts. The monastery contained many golden statues including a gilt-copper image of Nampar Gyalwa that was two-stories high.  It also contained reliquary stupas enshrining the remains of previous abbots. In 1965 during the cultural revolution, the monastery was burned to the ground. In 1982, two monks who had been in residence at the monastery prior to its destruction began the process of reconstruction.

Supplication Prayer to the Lord of Refuge Dawa Gyaltsen

“You, a teacher born into the Amdo family lineage of Nangzhik, you spread the unrivaled Bön teachings of the White AH throughout your homeland.

You embody the essence of all buddhas by having having perfected the exalted qualities of the major and minor characteristics.

I pay homage to the Buddha who manifested in human form!”

— Translated from the Tibetan by Raven Cypress Wood 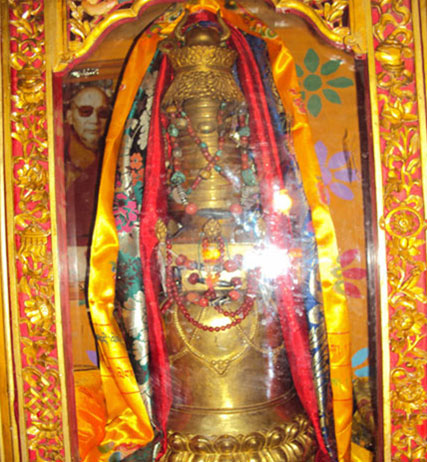 At the age of sixty-seven during the water dog year of 1863 on the auspicious 8th lunar day of the middle winter month at mid-day, the warmth of his body and his consciousness concentrated at the center of his heart. His eyes looked straight ahead, unmoving. After the third sounding of the syllable “Pé!” related to the transference of consciousness practice, he left the shell of his physical body for the great bliss space of absolute reality.

Want to join the mandala of Nine Ways supporters? Follow this link https://ravencypresswood.com/donate/

Posted on January 8, 2022, in Uncategorized. Bookmark the permalink. 2 Comments.