← Aspiration Prayer for the Continuation of the Yungdrung Bön Teachings: Publicly Offered Translation
Book: Nangshig – A Tibetan Bönpo Monastery and its Family in Amdo → 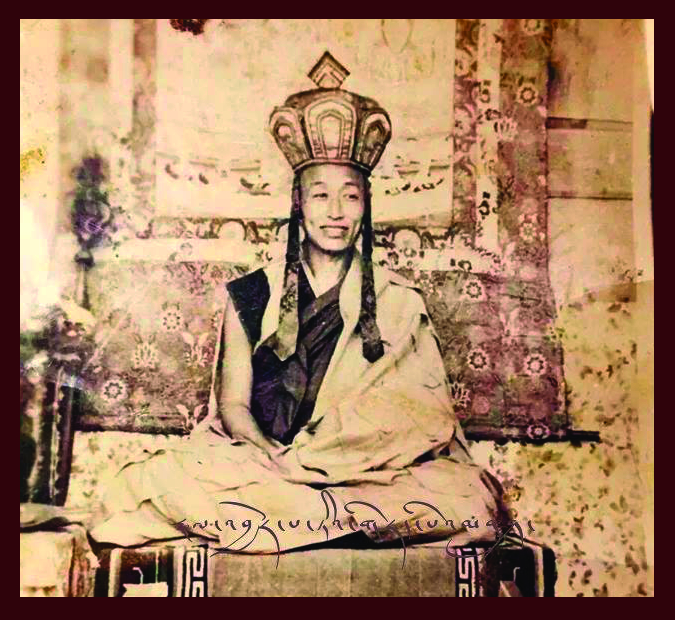 H.H. 33rd Menri Trizin Lungtok Tenpé Nyima Rinpoché was born in Tibet on the 15th day of the 5th lunar month in the Western year 1929 in the village of Kyongtsang in the far eastern province of Amdo. In 2020, this date corresponds with July 5th on the Western calendar.

When he was eight years old, his father took him to the nearby monastery of Phuntsok Dargyé Ling where he learned to read, write and chant. He completed his Geshé Degree at 25 under the guidance of Lopön Tenzin Lodro Gyatso Rinpoché. The following year he traveled South to the Bön province of Gyalrong, where he printed copies of the Bön Kanjur from traditional woodblocks. After gathering a vast amount of material and using mules to carry more than 100 volumes of the sacred texts, he made an arduous six-month journey back to his monastery.

In 1969, after extensive preparatory initiations, he assumed his duties as the 33rd Abbot of Menri Monastery and began leading the effort to re-establish Menri Monastery in Dolanji, India. After many years of indescribable and tireless efforts on behalf of the Yungdrung Bön tradition as well as the worldwide Bön community and all sentient beings, he displayed the truth of impermanence and passed into nirvana on the 27th day of the 7th lunar month in the Western year 2017.

The anniversary of his birth is a powerful day to engage in virtuous practice, recite prayers and mantra, and especially renew spiritual vows. In honor of the  extraordinary life and enlightened activity of His Holiness the 33rd holder of the golden throne of Tashi Menri Monastery Lungtok Tenpé Nyima Rinpoché, this Words of Truth Aspiration Prayer has been translated and is being made publicly available to the worldwide Yungdrung Bön community for their personal use. Follow this link to the Publications page and scroll down for the download link: https://ravencypresswood.com/publications/

“Through these unerring and interdependent words of truth,

may the banner of the teachings of sutra and mantra of the lords of the Land of Snow, the Menri Conquerors, be elevated, and may they remain for a very long time, until the end of existence!

who was endowed with the three-fold trainings and the happiness of holding the yellow robe.

May the auspiciousness of your profound and wondrous enlightened activity increase in every direction like the waxing moon!

May the extraordinary sunlight of the Victor’s teachings radiate throughout hundreds of directions!

May the victory banner of Bön be properly established, and may the teachings blaze for a very long time!

Mother Sipé Gyalmo, Protector Midü and brother and sister protectors who act to accomplish whatever kind of enlightened activity to uphold the white hat tradition,

may you raise the banner of the teachings! Oh listen!

Thus, this secret mantra Words of Truth Aspiration Prayer was composed by the distinguished Yungdrung Gyaltsen.

All translations by Raven Cypress Wood ©All Rights Reserved. No content, in part or in whole, is allowed to be used without direct permission from the author.

← Aspiration Prayer for the Continuation of the Yungdrung Bön Teachings: Publicly Offered Translation
Book: Nangshig – A Tibetan Bönpo Monastery and its Family in Amdo →