← The Lama Returns
Prostrations to the Root Lama! → 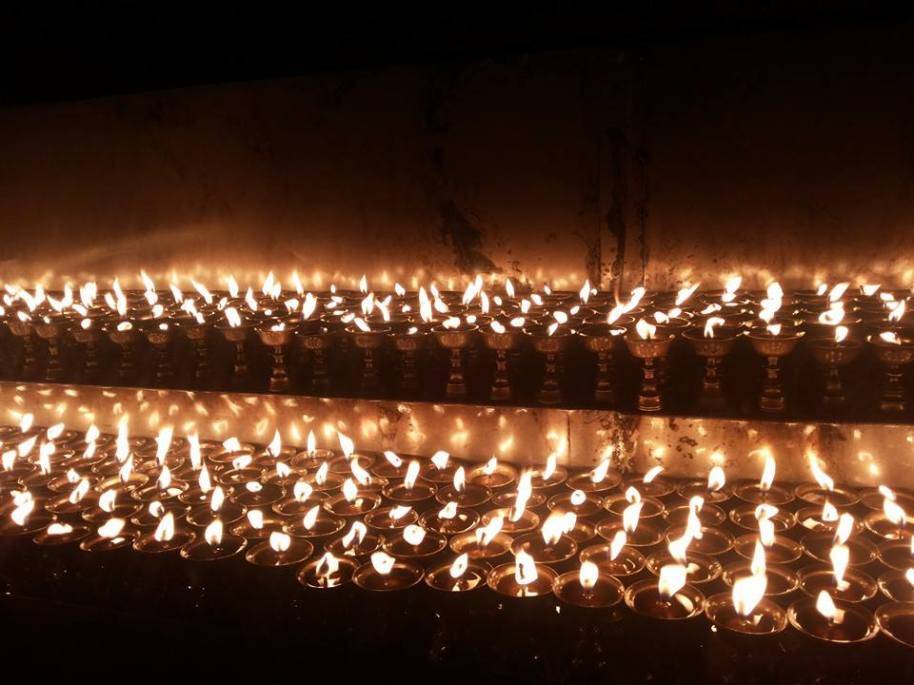 In response to the passing of HH 33rd Menri Trizen Rinpoche, I am providing this aspiration prayer for the Yungdrung Bön community to recite.  I apologize that it is currently only in the English language.  Although I am providing it for everyone’s use, please respect my copyright and do not publish or distribute.  However, share the link to this page.  What follows is the translation of the Tibetan.  The portion that is to be recited is within quotation marks.

Now, this “Precious Mala of Meaningful Aspiration Prayers”, words from the mouth of Tséwang, was composed within the meditation cave of Tong Gyung on the island within Lake Namtso  The oral transmission was given to the shepherd, Rikpa Rangshar himself, and is for the benefit of many life-times.

“At the crown of my head, upon a throne of a sun, moon, and lotus, is a divine gathering of lamas, enlightened beings and yidams.  I meditate steadfastly upon the assembly of the three supports, the shenrap lamas, buddhas and bodhisattvas, whose bodies are radiant and made of light.

(Say this in order to confidently generate devotion towards that divine assembly of refuge.)

From within an infinite realm of completely pure space, is the divine assembly of lamas, enlightened beings, and yidams;

and an assembly of the three supports: the shenrap lamas, buddhas and bodhisattvas.

Although they are never separate from the space of self-nature,

I, and all other sentient beings pray to the lama seated upon a lotus throne at the crown of the head, please hold us with your compassion.

I, and all other sentient beings respectfully prostrate to all these powerfully wise and compassionate places of refuge.

I openly admit and confess my non-virtuous and negative activities.

I present the external world along with its internal contents as a pleasing offering. Please bestow the supreme attainment of non-conceptual wisdom.

Whatever acts of virtue that I have done during the three times,

I dedicate completely for the welfare of all sentient beings who are as pervasive as the sky.

May all beings realize the true nature of their own mind!

Wise and compassionate places of refuge abiding in un-manifested space,

please pay heed to me and listen without missing anything.  Because I offer this aspirational prayer of devotion,

Accordingly, I pray that what I have asked will be accomplished.

Now, may I obtain a pure human body in order to reach to the limit of virtuous activity of my three doors.

Having cleansed all defilements of the conceptual mind,

May non-conceptual wisdom arise within my mind-stream!

Having pacified all obstacles of virtue and all adverse circumstances,

May I accomplish all my wishes and complete the ten virtues!

Having spread the teachings and lived a long time,

May I benefit all sentient beings who come into contact with me!

When the great time of impermanence arrives at the moment of death,

May the illness and pain of the body be pacified, And having cleared away the clouded visions of dullness and lethargy,

Because of hope, may I not have desire and attachment towards performing the deluded activities in this world!

Having completely pacified terror, misery, and the afflictive emotions,

May I abide in the unmoving state of the natural mind!

When fear arises in this mass of flesh and bones, this illusory body,

And deluded visions arise from the five lights,

Having recognized them as a magical display of the mind, the self’s expressive energy,

May I liberate to the five Enlightened Bodies and the five wisdoms!

When the life-force has come together into the center of the consciousness,

Having liberated the deluded visions of sound, light, and rays into themselves,

And having recognized the three Enlightened Bodies,

May I escape from the deluded vision of the narrow passageway of the bardo!

Having sent out the essence of the natural mind, which has the characteristics of AH, from the central, dark-blue channel of bliss,

And having dissolved into the dimension of Küntu Zangpo at the crown of my head,

May I become perfectly enlightened in the space of absolute reality!

If, due to the power of karma, I take a rebirth,

Having renounced all negative places of the hell-beings, hungry ghosts, animals, gods and humans, as well as savage places that have lost morality,

May I be born in the middle upon the victorious southern continent!

Having renounced all impure doors of birth into negative families such as being born a predatory animal, a bird, a beast of burden, a wild animal, a slave, a human who has a bad influence, a military person, or a butcher,

May I obtain a human body in an honorable and wholesome family!

Not born into a body that is crippled, deaf, mute, blind or with incomplete sense organs,

And having perfected the characteristics of a positive and beautiful form,

May I be a proper vessel of truth, a speech emanation!

Renouncing the world of deluded leisure activities and non-virtue,

And having met with strong devotion towards virtue which has the three kinds of faith,

As well as having met together with a lama who has the three kindnesses,

May I have perfect renunciation when I am young!

Having pacified demons, and the eight classes of beings,

May I be surrounded by loyal helpers and have an abundance of favorable circumstances of virtue!

Having generated an intense, tireless zeal and forsaking laziness as well as the distraction of amusement,

And having purified my three doors and the phenomena of my mind-stream,

May I skillfully perfect the three trainings!

Then, having renounced all pride of cleverness and knowledge,

Essentializing words for the benefit of not following speech,

And having purified the view of yogic power,

May I have an experience of the profound, great vehicle!

Having produced within my mind-stream a lack of desire or attachment towards this world, toward friends or enemies, material things, or property and wealth,

And having liberated the knots of greediness regarding subject and object,

May I abide in the state of the unmoving, nature of mind!

Self-liberating in their own places the truth-less vision of the external six senses, the ego, as well as subject and object,

And being free from the reference point of any graspable, substantial entity,

May I realize the magical illusion of all the various visions!

Having cleared away inner conceptuality, the movements of the intellect,

Into a state of non-attachment that has been pure since the beginning,

And having increased insight arising from non-deluded meditation,

May I attain the state of enlightenment for myself!

Having liberated dullness and lethargy, anger, agitation, doubt, hope and fear into the inseparable, luminous state,

And having recognized my own self-nature as the manifestation of the three Enlightened Bodies,

May deep certainty and confidence be produced!

Having attained the signs of accomplishment of the outer, inner, and secret paths,

As well as the power of both ordinary spiritual accomplishments as well as illusory emanations,

And having completed the stages of the intellectual paths and grounds,

May I perceive myself the same as the equal taste of the natural state!

Not being separate from non-conceptual wisdom,

But having been separate from the essential taste of experience and realization,

Having attained the primordially empty and rootless state of equanimity as regards external existence, outside and inside, cyclic existence, and all phenomena,

And having completed these multiple and diverse things all at once,

May I arrive at the level of the inexpressible, Bönku!

From the faith and devotion of all transmigrating beings,

Manifests the four immeasurables within the state of the Enlightened Mind,

And the darkness of the minds of sentient beings is cleared away.

May the wheel of the Yungdrung Bön turn!

Having subdued obstacles, and fully developed and spread the teachings,

And having transformed into each protector and object of refuge in order to suppress the brightness of the opponent’s appearance,

May I, myself, possess the four kinds of compassion!

From great compassion and skillful means,

Without weariness and for the benefit of sentient beings,

May I, myself, quickly and compassionately guide all sentient beings of the six realms, without exception!

Through the capacity and power of compassionate blessings of knowledge and kindness from the places of refuge, as well as the devotion of my three doors,

Having quickly and fully accomplished this completely pure aspiration prayer,

May all of cyclic existence be shaken from the depths!

The places of refuge, the enlightened beings, the assembly of outer and inner deities,

As well as myself and other beings of the six realms who are as limitless as the sky,

From the equanimity within the state of the single taste of the varied phenomena,

May we be liberated into the space of inexpressible absolute reality!

(Thus, recite this three times.  As for this “Precious Mala of Meaningful Aspiration Prayers”, the great Tséwang Rikdzin, composed these words for the benefit of many lifetimes while in a secret cave upon an island in Lake Namtso  The oral transmission was given to the shepherd, Rikpa Rangshar himself. In order to manifest into the liberated family of Tséwang, don’t forget the benefits of this!  Morning and evening on auspicious days, make this aspiration prayer again and again in an unbroken way.  Thus, Tséwang spoke this from his own mouth.

Make this aspiration for both one’s self and others.  Having the three extraordinary supports, and in the presence of the excellent lama, and having extraordinary abiding during the time that the sun or moon is eclipsed, or at the anniversary of the victor Shenrap taking birth or passing away, or the time of one’s benevolent parents passing away, or at the time of one’s root lama passing away, offer this aspiration prayer.  After a long period of veneration, perform the yidam practice.  From that, if you perform a yidam practice, guard your discipline even for a single generation stage.  If you make a commitment regarding this very aspiration prayer, in the future, it is said that you will be reborn into the presence of Tséwang.)

This prayer was translated by Raven Cypress Wood ©All Rights Reserved.

Do not copy, publish, or distribute in part or in whole in any manner without permission.

May the protectors forgive any errors!

This prayer is offered for the personal use of Yungdrung Bön practitioners, and a pdf of the translation can be downloaded by following this Google Doc link: https://drive.google.com/file/d/1G_Shzw3C9ub7Fdf3yNpHx8f4wL3fjTa2/view?usp=sharing

Posted on September 14, 2017, in Translation, Uncategorized. Bookmark the permalink. 8 Comments.

← The Lama Returns
Prostrations to the Root Lama! →