The Field of Accumulation: The Lineage of the Three Renowned Cycles of Dzogchen 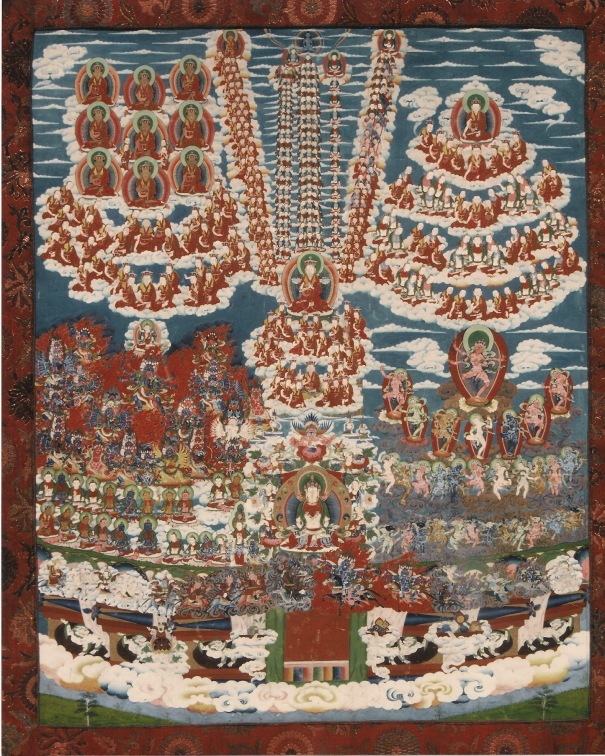 In the Yungdrung Bön tradition, the place where the deities and objects of veneration are gathered is called the “Tsok Zhing”, the “Field of Accumulation”.  It is also sometimes translated as the “Field of Merit” or the “Merit Field” because what is being accumulated by paying homage and making offerings to this place is merit, or virtue.  This is the Merit Field according to the Menri Tradition from a drawing done by the great master and scholar HE Yongdzin Tenzin Namdak Rinpoche.

Diagram highlighting the placement of the Dzogchen Lineage within the Merit Field thangkha.

#1-28 depicts the Lineage of the Three Renowned Cycles of Dzogchen. In Tibetan, the Dzogchen Drakpa Korsum Gyü.

1. The source of the lineage, the White Light Deity, Shenlha Ökar.  He appears in the form of dzok ku, the enlightened Body of the Perfected Qualities and wears the corresponding ornaments.  His compassion is all-pervasive.

2. The Five Victorious Families who have gone beyond bliss, aka The Five Buddha Families.

3. Chimé Tsukphü.  He was the previous existence of the enlightened Lord Tönpa Shenrab Miwoche immediately before descending from heaven to earth.

5. Milu Samlek.  He was the shen of the humans who received the teachings from Chime Tsukphü. He was born a prince in the ancient land of Tazik as his father, the king, was about to die.  He was known for his intelligence even as a young man.

#6-10  The Transmission of the Changeless Sages

6. Lushen Yeshé Nyingpo.  He is the shen of the lu, aka nagas, who received the teachings from Chime Tsukphü.

10. Sangwa Düpa.  He was a chief disciple of Chimé Tsukphü. He was born a prince of Tazik.

#11-14 The Transmission of the Scholarly Translators

14. Nyachen Lishu Taring.  A king and queen found a beautiful young girl in a forest. They named her Takza Liwer. Some time later, through the performance of ritual, she transformed herself into a man. However, she was still female when she wrote the root text for the Lineage of the Three Renowned Cycles of Dzogchen in the 8th century.  As a male, he became heir to the kingdom and was called Nyachen Lishu Taring.

18. Zhotön Ngödrup Drakpa. He was an emanation of Lishu Taring and a tertön, or treasure revealer,  who rediscovered hidden texts behind a statue of Vairochana in Lhodrak that were hidden by Lishu Taring during a time of persecution for the Yungdrung Bön.